Diversity is the key

March 17, 2019
I agree with the message of M(ooh)ZAIK on this poster: diversity is key. Diversity means everyone has equal chances and is involved in projects according their talents. This way, fewer people will be unhappy. 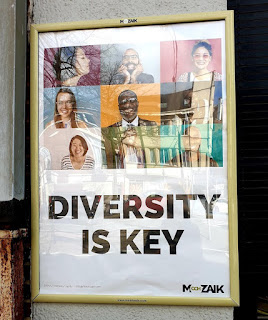 Being accepted for jobs without having to change name will reduce anger by many youngsters from migrant backgrounds who turn inwards to their own group and even to extremism as they feel they are not understood and want to be heard (but in the wrong way).

But also youngsters from here are angry. Some because some think migrants are taking their jobs while they can also be angry because jobs are insufficiently paid, certainly compared with older employees of whom many can no longer keep up with the speed of changes in society and thus can be considered as overpaid, certainly compared with youngsters who understand much better the new techniques and less the older techniques that are indeed slowly disappearing.

Youngsters are angry many of the older generation refuse to acknowledge the fear of youngsters for the future and therefore they take to the streets to have their voice heard while then they are blamed for not being at school. But, they only want that the older generation listens and indeed show more support for the new technologies while they are desperate when they notice many elderly condemn their actions because they think the younger generation thinks the changes can happen overnight. Of course, the future generation understands this is not possible but the investments must now happen so when they finish their education the technologies will be ready to use. Therefore, diversity at the work floor so the elderly are informed what is already possible and what is needed to do for the future. Indeed, continue worship of gold, silver, wood and oil, all that is dead will not be our future. Also investments in new nuclear energy is not the solution as a disaster becomes really a disaster whereby areas become inhabitable.
Diversity will reduce anger by women of whom many still find it difficult to climb the career ladder, especially in what were considered as real "men jobs" while now many discover they earn less than male colleagues for the same work.

Indeed, being able to work within a diverse society but ALSO to earn sufficient from the work they do to live a good life in a relatively fair society. This means not a society where top earners (who are mostly top employees in big companies) demand other employees accept a freeze and even reduction of their wages because companies need to compete with companies in low wage countries. If the top would agree to earn less, or at least pay their taxes instead of begging for even more tax reduction, profits could rise for companies without the need to reduce employees wages or reduce the number of workforce. People are angry that the rich say things such as "the introduction of a fly tax would discourage that ordinary people travel and thus is good for the environment" (as a rentier said today on the radio) while they continue to fly as they did before because the small tax is insufficient to be felt by the rich who may even be able to reclaim it. Also a famous British chef said ones that parents should not spend too much on a television but instead spend money on good food. Indeed, the poor are not allowed to have what is today considered as basic to be up-to-date with the news but also to relax and forget troubles.

And apart from the obvious to accept people from different skin colours while men and women should be equal, it also means giving persons with a handicap the possibility to do what they can; certainly now as new technologies can help them achieve more than in the past. Further, it also means informing people how to live a healthy life but accepting that some people choose to be fat while others prefer to be skinny. It also means accepting those people who choose to smoke although this also means that smokers must accept that their behaviour disturbs others and thus can't be done anywhere such as not in a closed area or near children as this affects others. It also includes that, when they need help society should provide them help.

Diversity, a key to a better society as people learn to know and appreciate each other when they work together, or they are in sport or art clubs together, .... If everyone has a fair chance, both people born in their own country and those who were born somewhere else but moved to another society while companies stop the exportation of jobs to low wage countries with the argument it is good for society than most people don't mind to know people from diverse backgrounds. Proof is the period before the financial crisis of 2008/9 when multicultural society almost became reality until the crisis impoverished many and competition started among many for low-paid jobs.

Of course, hate preachers will continue to shout but at least it is more likely fewer will listen and more will condemn them so they have less influence.
Conflict Diversity Economy Generation LPG Multicultural society Society