Showing posts from September, 2015
Show All

(12n) President Obama making a wrong decision - obvious to everyone 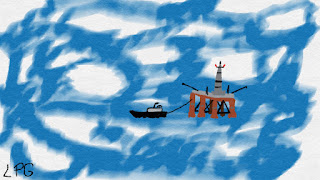 President Obama, receiving little if any respect from opponents (what may be understandable) but also often loosing any respect from his initial supporters due to wrong decisions so people sometimes wonder on whose side he really stands. Only a few weeks ago President Obama wanted to leave a lasting legacy by announcing a climate deal that should result in a huge reduction in gases that are responsible for causing climate change and this by stimulating investments away from mainly coal.
And now President Obama needs to defend himself because he allowed Arctic oil drilling in the Chukchi Sea with the falls argument the economy still needs oil and gas and thus it is better to get this from domestic producers than from foreign import. Falls unless you are convinced that burning oil and gas are essential for the economy and then the argument he uses is correct. One could even accuse the president that he wants to stop the use of coal to promote oil and gas use.