Lately I am having very bad dreams. They go about killing myself, or others. They wake me up and leave me awake for quite a time. I hope they will disappear one day.

When I have these dreams, I do some reading (last night about Hara Krishna), or after my dream about suicide, I did some praying and that made me fall asleep again. Also singing in my mind will remove the bad thought, singing 'Our Father' or 'Hare Krishna'. These made the mind calm. I also started doing some meditation. Two evenings ago, I did some meditation.

Lately, on Friday August 29, I went to an exhibition in the British Library after an interview for a job. The pictures below show the building of the library (in the background you can see the new international train station Sant-Pancras where the Eurostar now leaves to Belgium and France). 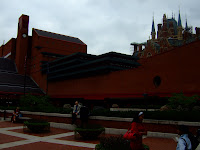 The exhibition visited had the name: 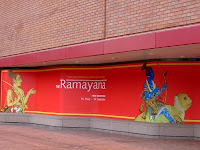 The story is the following (I remember this, so if some mistakes are made, forgive me):

Demigods beg the Uppergod (Vishnu), to go back to Earth to tell the people again how to live as they turn more and more to the evil. Vishnu agrees and return to the Earth as the incarnation named Rama. Rama grows up but is abondonned and have to leave to the forest. Here he will defeat some evil demons. Then one day Sita arrives, they fall in love and marry. But there is an evil king, Ravana, who kidnaps Sita. Rama is sad, and does not know where she is. However, he has a friend, Hanuman, the monkey general. Hanuman runs over the sea to Sri Lanka (a bridge is laid by the Gods), and finds her. He returns, tells Rama, and they form an army (the monkey king Sugriva agrees to fight with Rama). They go to Sri Lanka, and have to fight with many evil brothers from Ravana.

One of Ravana's brothers is the giant Kumbhakarna. This person is so bad, that the Gods decided to make him sleep for six months and he is allowed to wake up for one day. Ravana decides to wake up his brother. Kumbhakarna is so tall, he can eat a whole buffalo, and he drinks lots of wine. He is angry with Ravana because all this was forsay and still Ravana went on with his evil thoughts. He nevertheless agrees to help Ravana. The battle starts, and many monkeys (the good) are killed. Of course, in the end the giant is killed, thereby part of the city is destroyed.

Another story is about another brother (Indrajit) who wounds Rama (special herbs in the Himalaya are needed to heal Rama). His brother is also wounded. The bad guy pretends to kill Sita, and Rama is sad. However, Ravana's wise brother (Vibhisana who told Ravana not to be bad and decided to join Rama), tells Rama that Ravana would never allow Sita to be killed, giving Rama the power again to continue the fight. The city where Indrajit lives is attacked during the night because then, the evils are drinking and having sex, and are not defending their city, so they are unprepared. Indrajit is killed by a brother of Rama.

The last story in the battle is the defeat of Ravana. Ravana knows that he will die, nevertheless, unless surrounding himself and thereby saving himself and the rest of his people, he continues the battle, not recognising he did bad. Rama kills him in a battle man-to-man, all evil is now destroyed.

Rama then sees Sita, but ask her how he can trust her. She proves he can by throwing herself in the fire, knowing that his love will save her, and indeed she is saved by Gods. Then everyone believes, and they prepare to marry.

After 1,000 years, Rama is reminded that he has to return to heaven and humans can start all over again with annoying each others, and this continues even nowadays. And all gets worst because most have forgotten God and do as they like for their own interests while others think to know how to behave in Gods name, thereby killing many innocent people.

And my main concerns are the situation in Georgia and Ukrain; the problems in Pakistan, and what they might do with India about the disputed region between both countries; what China is doing in Tibet, their own country (with prosecuting their own people, and destroying their environnement) and maybe even with Taiwan; what some muslims will do (e.g. Osama bin Laden). Also what goes on with the environment.

I hope we will use our brains and do the good. However, many people can chose the one they want (in Pakistan, Russia, and the rest of the world, and they themselves, have to accept the consequences). Now elections in the US, lets hope a wise man is chosen.

Lets hope everything will turn in the right way.
LPG Ramayana