This Guardian article should be read by anyone who hopes a new referendum will be organised but doesn't acknowledge why people voted to leave. Those who think such a referendum will keep the UK inside the EU and solve all problems should not hope before its result is known. Even then is the question, can it return? This quote summarises it:

"I would vote to leave now because the way the EU has treated the UK on its exit has opened my eyes up a little bit. I've seen what they have been doing to other countries, particular Greece."

Here my analysis why I think many, mainly English, voted to leave the EU.

Indeed, someone in the article blames PM Thatcher and yes, even today many British politicians, often Thatcherites, continue the destruction of the social cohesion in their own country. And thus it is not the EU who should be blamed that even slowed down this destruction by introducing workers and environmental protection. Still, many voted for the Tories who are considered as the only party standing up against the EU so afterwards (as someone says in the article) a British politician such as Mr Corbyn as PM can concentrate on the UK while others don't want him, even within the Labour party. And of course, as the article mentions, too many EU migrants (Polish in article) entered the country who agreed to work at lower wages than the poorest British who lost everything during the miners strike but still higher than in their own country whereby New Labour politicians allowed this open internal EU market to happen as the best EU member while other countries had a transition period after certain countries joined the EU. 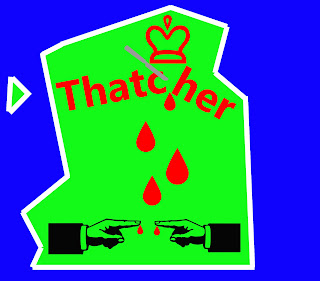 Yes, PM Thatcher really hated the British working class and broke the unions and impoverished the labourers so cheap labour could be imported that benefited the rich she loved. Also many British benefited as they could buy and sell houses while the strikers had nothing but poverty. She also continuously blamed the EU for everything wrong in the UK and for its introduction of worker rights. And thus, ironically, her policies resulted in an unequal society that planted the seeds of Brexit in the hearts of those who hated her and still do. Yes, PM Blair tried to counter this by increasing minimum wages and by spending money on the health system and education but forgot to cap the highest wages and became rich himself while he allowed migrants who brought wealth while poverty for others when they did the lowest paid jobs; indeed, not every migrant became rich in the UK.

I think, only if Londoners try to understand those living outside London can there be a change so the whole country benefits. Yes, many who moved to London came to appreciate PM Thatcher as the value of their house increased and they had well-paid jobs although they saw the benefits from being part of the EU and thus prefer to remain and blame the rest of England. (A third group are those who never change and call themselves thatcherites while they hate the rest of the world unless they can rule it.) And of course, often parts of the UK such as Scotland and Northern Ireland want to remain inside Europe as it weakens London's decision power in favour of regions. But I fear divisions will only grow. Because, why are mainly Londoners angry with the Brexit result? Because they fear they may loose their job, opposite to many outside the capital who hope Brexit will result in migrants leaving so job are again for people born in the UK while companies may now preparing to introduce robots to replace the cheap foreign labourers.

Already tactics such as calling MPs Nazis are happening and verbal but even physical aggression against foreigners may soon increase so the leavers can be sure the EU doesn't want the UK back. But also, does the EU want a return of the UK? Until the deadline the UK can unilateral decide to remain inside the EU. Unfortunately but I fear these opposing viewpoints will become increasingly uncivilized. Still, those who are in favour of referendums should honour the outcome of any referendum whether on gay marriage, abortion or being part of an international organisation, even when they don't like the result or they may expect troubles. But maybe I'm wrong and all may end as a storm in a glass water, without traces.

Still, I think that future historians will look back to PM Thatcher's time and judge her policies as many people did in the 80s but started to forget in the 90s and later: her policies divided the country into an even more unequal society and I think the price paid may be huge. PM Blair was able to halt the decline as he invested heavily to rebuilt what she destroyed but as the growth of inequality was unstoppable and even he became part of it, many people felt betrayed by the Labour party and this accelerated the country's decline.
19 Brexit Countryside Inequality London LPG PM Thatcher