January 30, 2012
Over the weekend, there was a festival in Gent, a light festival. Now that the nights are long (although they are getting shorter), it was refreshing to see so much light during the night. I went on Saturday, and I read about 200,000 people joined me, even when it was one of the coldest nights yet of this winter (but until now we didn't have a winter). Some streets became one-way for pedestrians, although I have to admit that some streets are very narrow in Gent and often not more than four people can walk next to each other thus streets are quickly blocked.

I include some videos and pictures of the things that people could see. I hope you will enjoy it although, of course, it is not the same as seeing it live.
The above video shows the old post office. The theme here were fairy tales. First we see a bear in space on the video and then a building that is overgrown with plants and flowers, all very beautiful. There were more "cartoons" and it ended with snow falling. 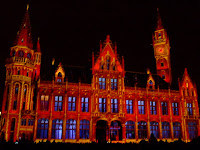 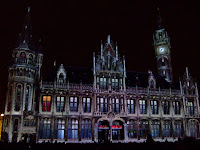 On the photos you can see more examples of how the building was illuminated. I find it impressive how the appearance of a building can change so dramatically with the use of light. This should be strong  lights as I assume you can't have this effect using an ordinary desk light. 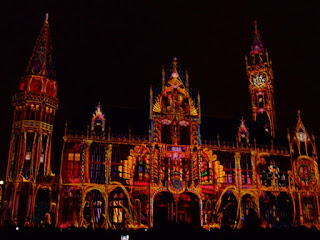 I visited this festival together with two friends, Kurt and Johan. Before going to the festival we had our dinner to have enough energy to withstand the cold as it was freezing. Then we were forced to walk to the city centre as the public transport didn't bring anyone anymore to the centre due to the large number of people already present. But then, it was worth visiting the city as these pictures demonstrate. 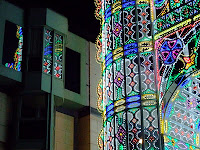 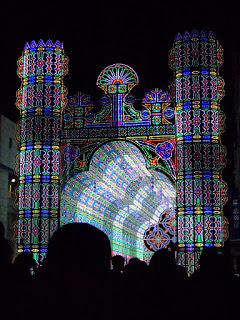 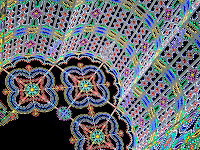 After the old post office we continued our journey through the city and we decided to go to the Vrijdagsmarkt (a large square) via a street where a large structure was installed build completely with lights. I felt as if I was a Maharajah walking in his colourful palace as the pictures demonstrate. 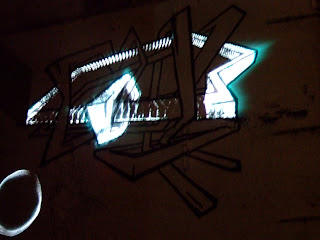 At the Vrijdagsmarkt there was a small piece of art between two buildings on a wall, almost hidden for the public. There were some bars painted on a white wall as if they were the remains of the building that stood ones between the other houses. Then, (mostly) white lights shone on this and gave the illusion of a 3D structure and that the bars were moving. Although very small, I liked it.

More things were happening in the city: people could project themselves over and over again on the wall of a church and this created the effect there were tiles against the wall. A little further, people and cats were projected on a building, "climbing" in and out of windows and annoying each other.

Then we went to the home of the bishop where the building came alive; it moved and danced to the music as you can see in the video. Although I have seen these things before on television. I still find it very well done.

We saw a few more art pieces before we decided to have a soup in a bar. After the soup, Johan left because he had to drive back home in another town while Kurt and I tried to go for a drink in a bar but as it was cold and the bars we entered were full, we decided to go back to his place as my last train left long ago.
Art Festival Gent LPG