On Sunday, I went to an exhibition about Flemish (Vlaamse) miniaturen. There were books that no-one had seen for decades and that will disappear again until someone will rediscover them. They are so fragile that light damages them. I find they should be scanned with modern scanners that will not damage the books and show them on the internet so that everyone can enjoy them and if they want to could read. I will show some pictures and give my comments with them. I used the brochure to scan most of these picture while two pictures where published in a newspaper. 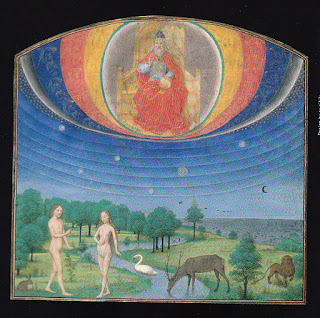 The picture on the right shows the advert for the exhibition. It is Eve. She is taken from the painting on the right where she is in Paradise together with Adam and some animals, all peaceful together and God is overlooking all of it (a voyeur?). Remember, this painting is part of a book, thus quite small and still so much details.Although it is very beautiful, the next one I show is much funier. 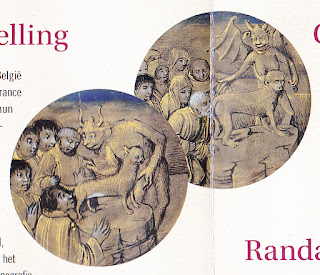 On the left two sober paintings showing two funny scenes. These where small drawings next to a bigger coloured one with the same theme that can be seen below on the right. It was an extraordinary painting. All these people are worshipping the devil, symbolised as giving a kiss at the bum of a goat. Can you imagine the laughter when the goat had to pee or shit? For the rest of his/her life would the person be the joke of the society. Not sure I would be honoured to be part of them. Or the animal could give them a beating with his leg.

Below, on the right you can see a painting from a book where the artist draws how he presents the book is to another person (the son of someone I have forgotten). It is a beautiful painting and the clothes of the receiver are amazing beautifully and so much detail. Another thing that makes these small paintings so special is that they are painted on perkament and lots of gold was used giving a very special and shiny effect. 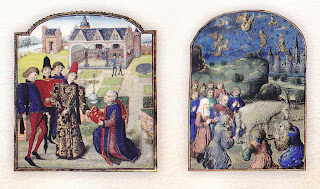 I already showed one example of a painting where a person receives the book from the artist. This was done very often. Lots of the books containing these pictures were ordered by a few rulers in Flanders in the Duchy of Burgundy. From 1404 till 1482 the Dukes of Valois-Burgundy ruled a large region stretching from Flanders till Burgundy in France. Many of these rulers loved the arts, including books with paintings. One of the main persons in this household was Philip the Good who ordered many books, and thus many books contain drawings showing the artist presenting the book to the duke. The picture on the right is a detail of a painting showing Duke Philip the Good whereby the complete picture (below) shows the Duke accepting the book. Of course, he paid for the books, otherwise no-one would work for him. His son, Charles the Bold, although it seems intelligent, was less interested in books and more in increasing his power. As a result he lost everything, including his own life, in a battle against the French king. End of Duchy story. 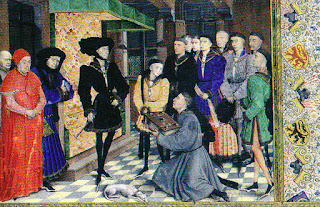 Not all paintings were that pleasant as the next one shows. Here Medea kills king Jason's son but splitting the boy into two. I guess she was not such an enjoyable woman at a dinner party. 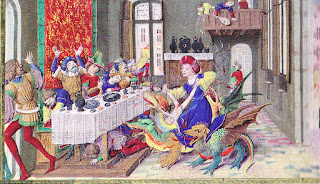 And some paintings showed live as it was lived by ordinary people in those days. I love the clothes worn in that period. 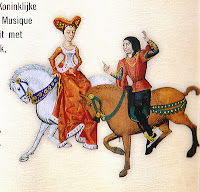 The final two paintings I describe show the paintings as part of the whole page of the book, so you have an idea how it lookes like. Some books were A4-format, while other were A5 (thus smaller). And so much decoration. The picture on the left shows the symbolic fight between the various classes: religious people fighting amongst each other, rulers against rulers and ordinary people with each other. Indeed, life can be a battle. The picture on the right shows the annunciation to the shepherds. And around both main paintings was more decoration. And often the books were shining because of the old. 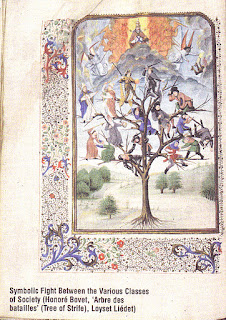 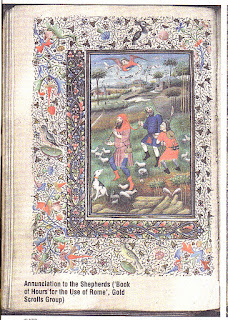