December 03, 2012
More than a week ago, the Anglican Church, also known as the Church of England (CofE, although it has members around the world) voted narrowly at its General Synod (the church's governing body) against female bishops (i.e. six votes short for approval while before 42 out of the 44 Church of England dioceses approved female bishops). The defeat not only came in spite of large supports of its members but even the present but almost past (Dr Rowan Williams) and the next (Justin Welby) archbishop of Canterbury (=Head of Anglican Church) were in favour. Even politicians (e.g. Mrs Maria Miller, culture secretary and minister for equalities) interfere and urge the Church to review its internal democracy and ask for a new vote so the General Synod would reflect the voice of the majority of the church. Indeed, what is the existence of the CofE if its members speak as the Roman Catholic Church? But politicians and the general public should know that bishops will argue that democracy at large cannot exist in Churches as ordinary people certainly cannot know the will of God.

But I wonder why women (or others) always want to belong to something that despises them? Why can't they take an initiative, such as so many men do? Why can't they start their own church when they are not taken serious in the current church; it would even be in the spirit of the one they worship i.e. Jesus (for instance, they could call it the "Church of England for Everyone"). Women haters could remain in the CofE while everyone else could join the new church. Jesus was not accepted by his fellow Jews, and instead of forcing others to accept him, he lived his own life. Of course, many of the old church would oppose this, but times have changed and many people may be sympathetic to the founding of the new church. Maybe even the old church may find it refreshing and accept the need to change. Also in the past many other churches (such as the Anglican Church) were founded because people didn't agree with the mother church. Even within other churches there are bishops calling for necessary changes. E.g. Cardinal Martini of Milan who recently died at the age of 85 called for a church that adapted to our times.


A main reason why so many people leave the CofE, but also other churches such as the Roman Catholic Church, at least in developed countries where people can think for themselves, is often not because people are no longer religious but because people no longer accept that some people say not all humans should be treated equally. Or they find the hypocrisy terrible (e.g. preaching about being good for others while protecting some priests who raped children and at the same time blaming gay people who have respect for others). Indeed, after people leave these large institutions, many people start looking for something that fits them better (e.g. Hinduism, New Age, going out with friends).

I think all Christian churches may re-unite one day, containing all alpha-males and women who don't fight for equally for women, a church that hates all those who show a whisper of femininity. And as long as people want to belong to churches, they will have the power to demand the suppression of certain populations as for instance is now happening in Uganda where anti-gay laws become stricter or in Ireland where a woman died because she was not allowed an abortion and thus two lives were lost. 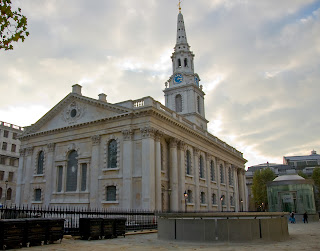 The same concerns companies: many women want to be part of the culture and then complain they are ridiculed unless they become as the men: ruthless. I think then those women are no longer an asset for the company as they become the same as the men (while many men now become softer although that doesn't mean weak). Nevertheless, often even then they are still not totally accepted by those who think women are weak and only good at home.

Why can women not do what so many men do? Many men who are good in something but feel restraint in their work by the company leave to work for another company they find appreciates more their talents or they start their own company and employ those who are equally enthusiastic about the work. If women find they are not respected, they could try to find work somewhere else where they are more welcome or start their own business with like-minded people. It would demonstrate women can achieve something doing it their way while older companies may understand what a loss it is when talented women leave and they may have to change their behaviour to survive. Also women could stop buying products from companies that show no respect towards them and thus show the women-power. This doesn't mean one should not fight for equal rights because if women are not allowed to start a business, then there is a problem. But that is no longer the case in Europe and laws exist that protect women and men (although often it is hard to proof they were discriminated).

Women should also understand that if they want to be successful, they have to make sacrifices just as men. Indeed, many men want to spend more time with their children, and thus accept they earn less so they can be sooner home while a large number of women delay pregnancies because they want to make a career or it is mainly the husband who looks after the childen or the children are placed in a boarding school.
Churches Feminism LPG Society