From the "Renaissance Project" to the 'Shard' in London

Here I write about the demolition of offices to be able to built the largest building of Europe. I am sorry for the bad layout, I worked hard on something nice but (although I do appreciate Google blogger is free) Gloogle blogger is very bad in allowing a nice layout of your pictures. During my design I see the text differently from what I see when the article is published. I hope one day it will be easier to arrange pictures.

Before the redevelopment of the region.


While I lived in London, I worked near London Bridge station in Guy's Tower, King's College London. I worked at the seventh floor but that was nothing compared with the 30th floor and at that time it was one of the highest buildings south of the river. I had a great time working there and doing research. Between Guy's Hospital and the station, there was a tall building housing PWC (PricewaterhouseCoopers) and although not as high as Guy's Tower, quite an impressing building although not really beautiful. If you looked from above, it had the shape of a star with only three arms. A little further was another building, simply ugly white without any imagination.

Before the works started, the building was introduced to the public via big posters. I was excited because I thought this would become a very beautiful building and also one of the highest of Europe, if it is not the highest. I decided I would document the development, starting with the picture to illustrate the future of this region (although they didn't take into account also the other side would change dramatically.

The start: demolition of PWC building.

Of course, before a new buildings can be built on occupied land, the old buildings have to be demolished. The first building to disappear was the PWC building while "Ugly" could stay a little longer, watching what would become her fate too. It was very interesting to see how this building was broken down, floor after floor. First the floors were emptied and the glass of the windows were removed. This is a good way to recover lots of material (e.g. glass can be melted and re-used) while it also reduces the amount of dust produced. It took a long time before the building was gone. In September 2007, the first crane was built that would help by the demolition, and only in the first half of 2009 was the building completely gone. The demolition of "Ugly" was still not started.

Building of a new building.


After the demolition of the PWC building, the new building, called Shard, started to rise above the city. Unfortunately, the start of the building of the Shard started around the time I left the country: the financial crisis and illness forced me to find a new job which I found in Belgium as a teacher. The consequence is that there are some major gaps in the story. Nevertheless, I can show the progress as I was more than ones in London visiting friends. It is quite amazing: between January 2009 when the foundation of the building was placed and the finalisation and opening of the Shard in July 2012 are only about 3.5 years. Remember it is now the highest building in Europe. There are less prestigious projects that take as long to be built. Also, the demolition of "Ugly" started so the development of that area can start ones the Shard is finished.

Before the redevelopment of the region.

The start: demolishment of old buildings. 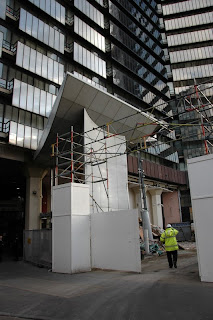 Building of a new building.